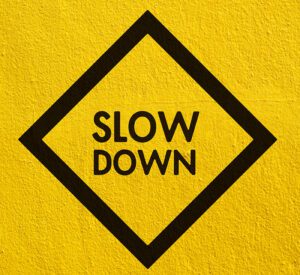 No matter what the nature of the script you’re delivering, enough can not be said about keeping your delivery slow and smooth.

Many commercial reads, especially a hard-sell commercial with a lot of hype, coupled with up-tempo music, can sound as if it’s really moving along. If you listen carefully, however, you will realize that the voice actor is not rushing the delivery. If it were rushed, clarity of diction would suffer. Any message, no matter what the mood is, will never move the listener if he or she doesn’t understand the words that make up the message.

“This week, we’re having an end-of-the-year sale that’ll blow you away!”

I would deliver this line with overpronounced deliberation, and slow it progressively from “that’ll” to “away” at the end.

We also slow down if we’re making a very important point, even on an individual word or a small phrase.

“After contracting polio, FDR was unable to walk or stand unaided.” I would slow this phrase progressively from “walk”through “unaided” for dramatic effect.

Most narrations should slow down progressively through the last three or four words of the entire script, to give the ending as sense of dramatic finality.

“Finally, the demographic transition is one of the most significant phenomena of modern history. As people get richer, they have smaller families.”

(Progressive slowdown through the phrase “…they have smaller families.”)

Listen to seasoned professionals and observe how much they slow down for clarity and drama.