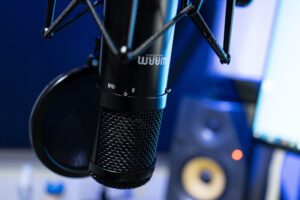 As I have listened carefully to the performances of some of the best voice over talents in the business over the years, as well as those of stage and film actors, I have observed strong connections in how the dramatic content of the script related to the grammar fundamentals I had learned in school. On the negative side of these observations, I watched many professional actors working on stage in choice roles lose the approval of their audience because they didn’t fully understand the phrasing and structure of the lines they were trying to communicate, not to mention the basics of reading comprehension and meaning. Many voice over training professionals do not understand this relationship.

Most of my beginning students share these shortcomings. They initially fail to grasp how to determine which words are important and which are just connective tissue or redundant, and they do not know how to apply those observations to the delivery of a script–this is a fundamental skill to learn in voice over training.

After over twenty years of recording these observations, I have written my first book about voice over. I hope it will motivate the buyers of the book to deeply explore the dramatic possibilities that lie within the structural dynamics of the English language, especially at a time when the educational system is generally failing to teach students to love and use the English language effectively, as well as to inspire in them a passion for reading.

World-renowned on-camera and voice actor Pillsbury Doughboy died yesterday of trauma complications from repeated pokes in the abdomen. He was 75.

Many celebrities came to pay their respects, including Mrs. Butterworth, Hungry Jack, the California Raisins, Betty Crocker, and Cap’n Crunch.

The grave site was covered with many flours.

Aunt Jemima delivered the eulogy, and lovingly described Doughboy as a man who never realized how much he was kneaded.

Born and bread in Minnesota, Doughboy rose quickly in show business, but his life in later years was filled with turnovers. Not considered by many to be a smart cookie, he wasted much of his dough on half-baked schemes.

In spite of being a bit flaky in his younger years, and a crusty old man in his twilight years, he was considered by many of his peers to be a positive roll model.

He is survived by his wife, the creative Play Dough, two children, John Dough and Dosey Dough, and his elderly father, Pop Tart.

He was buried in a lightly greased coffin.