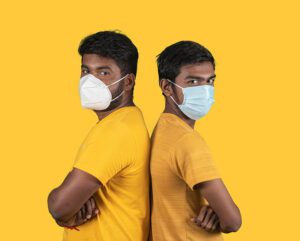 “This is my friend Tom. I have known (Tom) for over thirty years. He’s my best friend.”

Three very ordinary conversational sentences acquaint Tom with the listener. The first sentence introduces him, since he is new to the person to whom the sentence is addressed. Here, Tom is emphasized. In the second sentence, however, the listener is now conversationally familiar with Tom. To emphasize his name a second time would be unnecessary, or redundant. In the third sentence, it would be a similar situation without emphasis on Tom, but it now appropriate to use the pronoun he, since it would be doubly redundant to say Tom one more time.

When a noun, and rarely another part of speech, has been established in a script, the next time it is stated, it must be without emphasis. This shows the listener that you are keeping track of what is going on in the script. People do this naturally when they talk. If you continue to emphasize what has already been established, it will be very confusing for the listener. When people tell a story or explain a concept, they always naturally keep track of what they have already introduced, and take care not to re-emphasize it.

“XYZ Company is making you this amazing offer. If you buy our gizmo, we’ll double the repair period of our warranty. Double it, up to an extra year!”

The first time the word double is introduced, it could be emphasized to therefore make the point that the company is making a great offer. This time, however, when double is stated again, it is not with some emphasis, but with more emphasis, as this is hammering home even further the special quality of the offer. This is reiteration, or “saying or doing repeatedly.” It is always emphasized to heighten its dramatic effect. Reiteration occurs often in many medium-sell and hard-sell commercial spots.

Unfortunately, when most untrained people read from copy, they miss what has already been established, because they are not focused on what they’re talking about, or on the flow of subject matter. The same is true of situations where reiteration should be applied. This is typical of the way most people read aloud, from grade school throughout life.

It is important to read over and thoroughly understand any script you are about to deliver, which, most emphatically, includes redundancy and reiteration considerations.